Things You Need To Know About Polycystic Ovary Syndrome 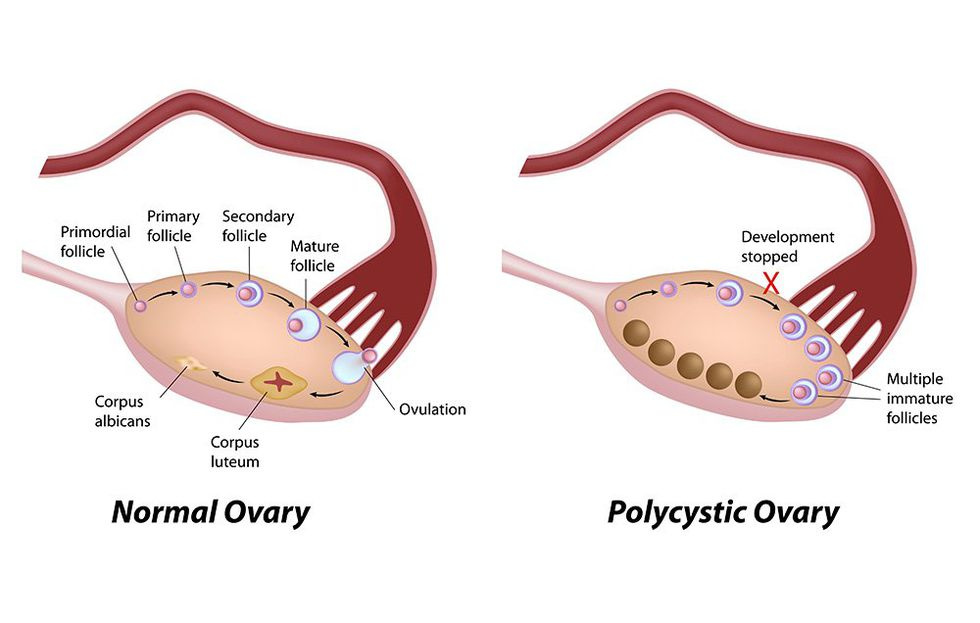 1. PCOS is a hormonal disorder:

Your ovaries normally produce some “male” hormones called androgens, but women with PCOS make too much. That can cause missed periods, thick body hair and hair growth, weight gain, and acne. Excess androgens also interfere with ovulation and can cause infertility: Each cycle, a follicle is supposed to break open and release a mature egg. In women with PCOS, that doesn’t happen. Instead, the follicle sticks around as a tiny cyst. (Sign up to get healthy living tips, weight loss inspiration, slimming recipes and more delivered straight to your inbox!)

Here’s where it gets tricky: The cysts themselves produce androgen, so it’s not clear if they’re what’s causing PCOS or if they’re the result of having too much androgen to begin with. “It’s a chicken-or-egg thing,” says Jessica Lalley, MD, a board-certified ob-gyn and associate clinical professor at Michigan State University.

PCOS is a pattern of symptoms in women, and the hallmark cysts are just one of them. Your doctor can spot these cysts on an ultrasound, but they’re often the last piece of the PCOS puzzle. More likely, your doctor will initially start testing for PCOS (perhaps with blood tests to measure hormone levels) because of other telltale symptoms, like irregular periods, excessive hair growth, and acne. Because those symptoms aren’t exactly debilitating to your health, you may feel like they’re not worth mentioning to your doctor—but don’t brush them off.

3. Even the best doctors can miss it:

Part of the problem is that there’s no one test used to definitively diagnose PCOS; it’s considered a diagnosis of “exclusion”, meaning a doctor will determine that you have it by ruling out other conditions that can mimic it. To further complicate matters, PCOS symptoms run the gamut of medical specialists: A dermatologist may treat your acne, but may not ask about your menstrual cycle; your gynecologist may know about your irregular periods, but may not take note of body hair.

“You have a number of healthcare professionals who can potentially treat this condition, but each one looks at it from their perspective,” says Anuja Dokras, MD, PhD, director of Penn Medicine’s Polycystic Ovary Syndrome Center and president of the Androgen Excess and PCOS Society. So be sure to mention all your symptoms, even if your doctor is primarily focused on one of them for the best treatment.

4. PCOS is the leading cause of infertility in women:

Many women don’t realize they have PCOS until they try to become pregnant and their irregular periods go from being an inconvenience to an actual problem causing infertility. “If you don’t get a period every month, then you’re not ovulating every month,” Dokras says. “So the chances of getting pregnant go down. You may need help from a fertility doctor or ob-gyn.” Most women with PCOS still have plenty of healthy eggs, so it’s often just a matter of your doctor or gynecologist helping you get your cycle back on track.

5. Insulin may play a role:

PCOS is closely linked to insulin resistance, and many women with PCOS have pre-diabetic symptoms. Experts know that insulin resistance can cause increased androgen levels, but doctors are still researching whether having too much androgen can cause insulin resistance. (In other words, it’s another PCOS chicken-or-egg riddle.) Either way, doctors have found the diabetes drug metformin helpful in controlling PCOS symptoms. A low glycemic diet—the high-protein, “good carb” diet often recommended to pre-diabetic patients—can also be beneficial treatment.

6. Weight loss may be the best medicine:

Obesity doesn’t cause PCOS in women, but there’s a significant overlap between the two conditions. The theory is that obesity contributes to insulin resistance, which boosts androgen levels and can make PCOS symptoms worse. “Even losing 5% of body weight will have an impact on a woman’s whole metabolic profile,” Lalley says. So if you’re currently at 200 pounds, losing just 10 could significantly reduce your symptoms and help you get pregnant. Not trying to conceive? Oral contraceptives can relieve symptoms by regulating your menstrual cycle and hormone levels. (Try these 15 teeny tiny changes to help you lose weight.)

PCOS symptoms are relatively mild, so if you aren’t trying for a baby, you may not be inclined to rush to the doctor. But unlike a schoolyard bully, ignoring PCOS symptoms can make them more aggressive: Irregular periods can increase the risk of uterine cancer, rogue body hair can get coarser, acne can cause scarring, and weight can become harder to manage. “The sooner your doctor makes a diagnosis, the sooner you’ll get treatment and feel better,” Dokras adds.

Having PCOS also increases your risk of diabetes, high cholesterol, and high blood pressure, says Dokras. Getting diagnosed and treated promptly is the best way to lower your chances of these problems.